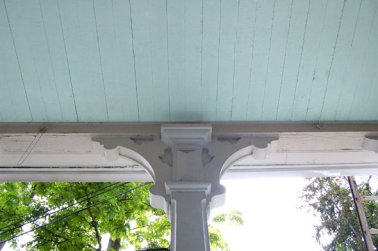 Why so blue? The origins of the blue porch ceiling is based in much fact and folklore.

You might have noticed the distinct use of the color blue on porch ceilings as you flip through the spring issue of your favorite home and garden magazine. Blue porch ceilings can range in tone from the palest of powder blue to shades of periwinkle and wedgewood. The trend of painting the porch ceiling blue  was once considered only a Southern tradition but is now prevalent all over the country. The practice is based on much more than just the creative use of color. In truth it lends a romantic charm to the interior of the porch, but there is much mystery as to why and how the practice first originated.

The basis of painting porch ceilings blue may have begun with regional influences. Aurora blue is a popular shade of blue used on porch ceilings in the Northwest. The color’s origins are closely associated with the Christian communal society called the Aurora Colony, which became popular in the 1850′s. Among the blues used on porches along the East coast, we look to the popularity of Victorian and Colonial architectural styles that were popular and can still be seen today in historic cities like Boston.

This vintage Victorian uses many colors associated with nature, including terra-cotta.

Pale blue tones that mimic the blues of the sky have always been popular for Victorian style homes. Victorian period homes have long been associated with integrating the colors of nature within their exterior color schemes. These include earthy tones such as ochre and terra-cotta along with blue reserved for the porch ceiling to remind them of the blue sky even when the days were overcast and gray.The use of these colors serves as a  constant reminder that brighter days lie ahead.

Along with regional influences, the desire of many homeowners to paint their porch ceiling blue is based on enjoying a bug-free porch experience. Some believe that painting the ceiling of your porch in this cool hue discourages birds and bees from building their nests in the ceiling. It is believed the color tricks the intruding insects or birds into thinking they have actually reached the sky. According to Sherwin Williams, most credible sources discredit this belief. However, this belief could be seated in historical truths.

When blue paints were first used on ceilings, they were usually milk paints, which often had lye mixed into the composition. Lye is a known insect repellent, which would explain why insects would avoid nesting on a painted porch ceiling. As milk paint has a tendency to fade over time, giving it a rustic look, homeowners would usually need to repaint their home every year or few years, covering the existing coat with a new coat of paint, and therefore a fresh coat of lye as well.

There are many theories on how blue porch ceilings became a tradition that has endured for generations in the South. One of the most widely believed theories arises from within South Carolina. Here folklore suggests that blue porch ceilings originated out of the fear of haints. Southerners, especially in and around the Low Country region of South Carolina, have a name for the color of ceiling paint used on porches – the soft bluish-green tint is referred to as “Haint Blue.” Just the name itself sounds spooky, huh?

The term “haint” is a Southern colloquialism defined as a ghost, apparition or lost soul — also defined as the spirit of a dead person or animal that can appear, in visible form or other manifestation, to the living.

Haint Blue, which was also used on door and window frames as well as porch ceilings, was believed to protect the residents from being “taken” or influenced by haints.The superstition evolved from the inability of the spirit to cross water since the lighter shades of blue mimic the color of water. Others believe that Haint Blue will protect the house and its occupants from evil spirits.

This open porch and sunroom combination in Elgin, SC, is timeless in its design.

Deciding what you believe in regard to the practice of painting porch ceilings blue is left for you, the reader, to ponder. However, one fact does stand out: blue is a calming color that promotes relaxation and peace. It also mimics the natural tranquility and beauty of sunny days and clear skies — with this in mind, is it any wonder why a homeowner would choose blue to beautify their outdoor space?

Many homeowners choose to paint their porch ceilings blue simply because of the way it makes a room look and feel. We even see the trend carrying into the modern screened porch and 3-season rooms of today. Blue is a calming color, so using it to paint an area of the house that’s intended for relaxation makes sense — leaving superstitions and insects by the wayside!

No matter what style or color reflects your own personal tastes, Archadeck of Central SC can plan, design and build a custom porch that speaks to your individuality. If this includes translating your vision of the ideal porch through custom colors or trim, we embrace designs that think “outside the box.” Contact us for a free design consultation today to learn more about our exquisite custom porch designs. (803) 603-2160
centralsc@archadeck.net

Visit our front porch and portico photo gallery and our covered porch photo gallery located on our website to see more of our quality porch designs.